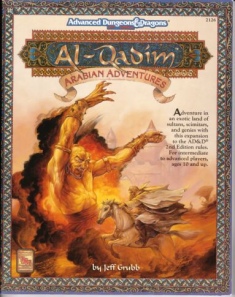 My office is still closed due to Hurricane Sandy, hence the relatively early hour of this post. Since the spirit of D&D is one of escapism, let’s leave behind the waterlogged northeast U.S. for the sun-drenched oases of Zakhara, the Land of Fate …

I picked up the Al-Qadim box set and Monstrous Compendium Appendix in 1995 for a total of $7 from a model store that was phasing out RPG products  (something of a trend at the time). It didn’t take me long to realize that all of the really crunchy rules bits were contained in the Arabian Adventures book, which I promptly had my FLGS order for me.

Before Al-Qadim, my primary impression of Middle-Eastern fantasy was based on the sinister Calormen Empire from The Horse and His Boy. I had also read Dune and watched Lynch’s film several times (it’s good to a 12-year-old), but for whatever reason I hadn’t made the explicit connection between the Fremen and the Bedouin.

I loved everything about Al-Qadim at that time, especially its relation to my then campaign of choice, the Forgotten Realms. Zakhara was a wondrous foreign spice to add to the adventures of psuedo-European heroes from Faerun. I still love Middle-Eastern inspired fantasy today, but I can now recognize that my youthful fascination was latter-day kin to Colonialist Orientalism (which I suppose puts me in pretty good company in the pulp fantasy world). Were I to dig out Al-Qadim now, it would be to focus on the setting as its own world and not just to add exoticism to a Western fantasy campaign. In fact, there is a large segment of the Age of Ruins world inspired by the Middle-East, but my current intention is to leave that largely out of the current campaign (save for the party member hailing from the region) so that I can focus on it completely in a theoretical later game.

From a system standpoint, Al-Qadim was relatively unique in its use of kits to represent the differing roles that classes could fill in a Middle-Eastern fantasy game. I would say that this was the best implementation of kits, which often get a (mostly deserved) bad rap  for introducing seriously overpowered abilities to low-level characters. The kits in Arabian Adventures really did serve the purpose of flavoring classes differently without needing to introduce new classes altogether.

Though there are still several campaign settings published for 2nd Edition that I haven’t touched on, the next one will probably be the last as a weekly feature, because it will be the last one that had a serious impact on my development as a gamer: Planescape, the first box set that I hadn’t seen advertised in the PHB.