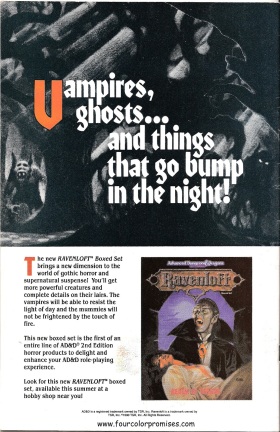 Unlike most of the other settings of the era, the first image of Ravenloft to stick in my head did not come from the inside cover of my PHB. As a kid who both liked horror and also tended to be pretty easily scared (or at least creeped out), the Ravenloft ads in Marvel Comics really hit a mark with me. I didn’t even understand what D&D was at the time, my experience having been limited to the cartoon and the Endless Quest books. But I would remember that lurid cover for the Realms of Terror box, run across it again inside the PHB, and then later come face to face with it for the first time in a store that mostly sold model trains but had a dwindling RPG section. That purchase may have been the first time in my life that I didn’t have to beg a parent when I saw something and was instantly overcome by that “It will be mine” feeling.

I fell in love with the moody, dark artwork and took the DMing advice about evocative description to heart — which meant that 15-year-old me got way too rambling and meticulous. It didn’t take long before some of my friends’ PCs found themselves wandering into the Mists. But therein lies the problem with Raveloft, as I can see it from my current perspective. The Mists are the worst sort of railroading plot device; they are completely unpredictable, completely insurmountable, and utterly beyond any semblance of player influence. (That issue, among a few others, is being addressed by Jack Shear’s Ravenloft Remix.)

Much of that is in the execution, though. Certainly the Mists as written are guilty of the great railroading sin, but I later realized that the Mists were just a representation of a common thematic device. The heroes are wandering and lost and head toward a hopeful light, only to find something much worse. When this device isn’t overused, and especially when it emerges from player choice, it can be very effective. Say, for example, your players are trying to avoid agents of an enemy nation and choose to take a far more risky path through the mountains even as winter rapidly descends on your world. Will they really be shocked or feel cheated when the snowy winds in the high pass reach a life-threatening level? But look! Who knew there was an inhabited keep all the way up here, but the torches are blazing upon the battlements …

At this point, I’ve resigned myself to these 2nd Edition campaign setting posts leaning heavily toward memoir, which isn’t really what I originally intended, but those are the words that are coming, so such is life. Not 100% which one will be up next, but probably Dragonlance or Al-Qadim.

2 thoughts on “The Worlds of 2nd Ed: Ravenloft”